The AMD Renoir laptop chips have been out for a while now and have fantastic benchmarks for most workloads, beating many desktop CPUs at a much lower power draw.

Renoir should also be good

From what I understand, Renoir CPUs use a monolithic design that should make them even better suited to audio since cross-core latency is lower than their desktop counterparts. The Anandtech article linked above has a comparison of CC latency between the desktop 3950X and 4900HS, and the worst-case latency has reduced from 118 ns to 69 ns!

How does this translate to real-world performance?

Well... in my experience, excellently.

My setup and comparison

My current studio machine, and baseline for comparison, is a quiet desktop:

I bought an HP Omen 15 with a Renoir CPU:

I've since upgraded to 64 GiB dual-channel RAM, but these benchmarks are with the stock 8 GiB that came with the machine, comments on this later.

Both systems were connected to the same Soundcraft UI24R, set to a 'Performance' power-profile, and drivers were set to 'minimum latency'. I usually work in 48 kHz, 24-bit. 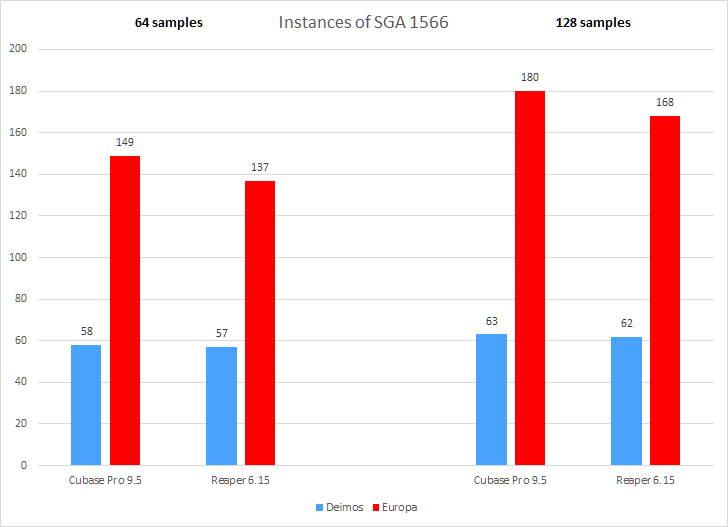 The 4800h scores roughly 3 times as much as a high-end desktop CPU from 7 years ago. Granted, the effective thread-count is twice as high, but this is a more-than-proportional increase, and in a laptop chip.

My previous upgrade was from the i7 2600 to the 4770k, and honestly, I was underwhelmed. But this time it's a very noticeable upgrade, and better value as well.

Ryzen is memory-sensitive and likes dual-channel, fast, RAM in general. I haven't re-run the benchmarks after the dual-channel upgrade so I can't quantify this, but I'll try to update this post when I do.

Of course the laptop is much noiser than a desktop with a silent cabinet, but this is not a problem while composing, only while recording.

My interface can record without a computer connected, and I'm using that for recordings that demand absolute silence.

If you're on a budget and need a quiet room for recordings you could connect a mobile device to your interface, most are now class-compliant.